It’s 9 o’clock and we’re ready to go. But it seems that drivers aren’t. No movement at the gas station. So let’s have a morning coffee (guess, whose idea was that). Surprise! With two cappuccinos we got free chocolate rolls.

This time it was easier. At 12 o’clock we caught a ride. Atilla was going from Netherlands to Turkey and was so nice that he gave me a ride and amused us with a conversion. Our destination was Inđija, a town between Novi Sad and Belgrade. So we took off at the gas station that seem to be the closest: 10-15 km away. Still quite far to walk next to the road under the burning sun with big backpacks. OK, we’ll hitch-hike. We made a banner, again, misspelled! Someone was so nice to tell us that.

Nobody was going to Inđija, but a nice young couple in white Reanult 5 (sorry, we didn’t get your names) offered us a lift to the highway exit to Inđija. Waiting time: 5 minutes.

Later, just after passing by the pay toll, we caught another ride, a truck. We didn’t have any common language with the driver, but as I understood from our Polish/Serbian dialog, he was going some other way, but decided to to leave us in the center of Inđija. Hitch-hiking in Balkans IS easy!

On a 100-m long street we found 5 ice-cream places. Igor felt a little bit like home with all the bars and „terracitas“ all the main. We easily found home of Igor, our CS host. He had a really nice place, with two lovely kittens and a sweet dog at the backyard. He was also hosting another Polish girl, Zuzia, who was coming back from her hitch-hiking trip from Georgia. Thank you for some traveling tips, Zuzia!

After arriving, Igor took us to Belgrade by car, so we could see a little bit of this interesting city. Once I’ve arrived there, I felt a little bit like home myself. There are a lot of small details in Belgrade that reminds me of Warsaw. But I must admit, Serbians seem to have more relaxed and chilled out attitude than Poles, especially those from the capital. 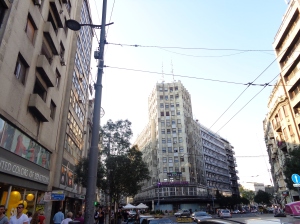 In the evening we went to a free beer festival (watch out – the security is checking for lighters at the entrance and throws them away!). We drunk some beers and listened to Serbian music. What a great beginning of our trip! 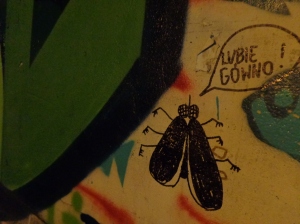